In the early 1800’s, the first religious services in the Goshen area were held under a brush arbor on a farm 1.5 miles northeast of the present location. In 1808, John Fly was given credit for donating three acres of land for a church building and burial ground. John Fly was a faith doctor and lay preacher. He served as a local preacher until circuit riders were sent by the Methodist conference.

In 1812 the Tennessee Conference of the Methodist Church was formed through the division of the Western Conference. In November of that year, John Crane (read below for more info.) was appointed to the Duck River Circuit. (This included Franklin, Columbia, Santa Fe, Goshen, and about 20 other places.) Rev. Crane died in 1813 and was the first person buried at Goshen.

The church was organized in 1808 but it was not until 1835 that the first building, a log structure with an open fireplace, was erected. In 1882, the log building was replaced by the present frame building. In 1949, the building was repaired and wired for electricity. In 1956 gas heat was added to the building. In 1965, three new Sunday School rooms were added at the rear of the building. These three rooms were built with walls dividing them which could be folded back to make one large room when needed.

The orginal hand-hewn poplar benches were replaced in 1968 by more comfortable and attractive pews purchased from First Methodist Church in Columbia. Running water was added in 1979. Soon afterwards, a 15 x 17 foot room with kitchen facilities, closet, and two restrooms was added. The last addition to the church was in 1995. This was the addition of a fellowship hall and kitchen with five classrooms located in the basement area.

Goshen Church has grown steadily throughout the years. In 1945, the average Sunday School attendance was 23. The average for the year 2005 was 57. There are currently 92 professing members on the church rolls. Average attendance at Sunday morning worship was 75 in 2005.

Most of this information was taken from a paper compiled by Jewell Baker Shouse in March 1984. 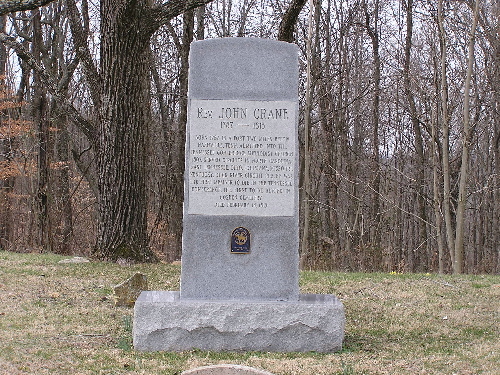 John Crane was the son of Lewis Crane, one of the first settlers in the Cumberland area. He was born at Eaton’s Station, a fort about two miles down river from the public square of Nashville in 1787. At the age of twenty, Crane was admitted into the Western Conference of the Methodist Church. During the six years of his active ministry, he served circuits in North Carolina, East Tennessee, Ohio, Louisiana, Missouri, and Kentucky. Of these early ministers it has been said, “no chance of weather or climate, no swollen stream or lofty mountain hindered them.” Crane continued to travel and preach until about two weeks before his death, when he was forced to quit from fatigue and a severe cold, which developed into inflammation of the lungs. He died February 14, 1813 at the age of 26 at the Mitchell home. The Mitchell home was located about one mile south of Goshen Church. Crane was the first member of the Tennessee Conference to die and the first person to be buried at Goshen.After his death, his purse was opened and found to contain 25 cents and his parchment of ordination. This confirms that he was a dedicated Methodist circuit rider. In the summer of 1964, the Tennessee Conference Historical Society erected the Rev. John Crane Monument which was made of Stone Eternal Georgia Granite bearing a brief outline of the birth, life, and ministry of John Crane. The monument was dedicated on Sunday September 27, 1964 by the Rev. Fenton Warren, Superintendent of the Columbia District. At the June, 1979 Tennessee Annual Conference, his gravesite was named a United Methodist Historic Site.

This information was taken from a paper compiled by Jewell Baker Shouse in March 1984.